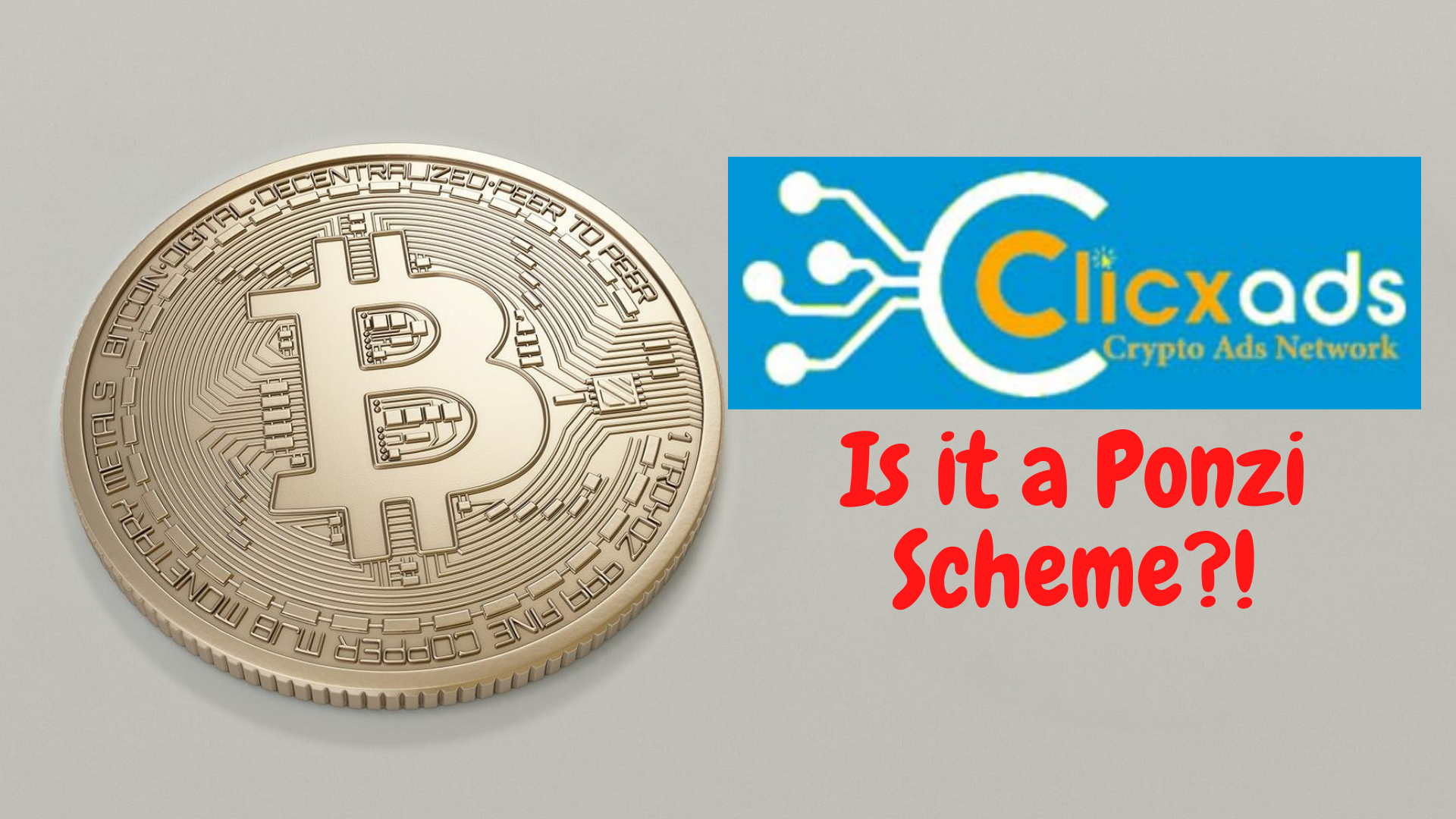 Welcome to my ClicXAds review!

You might have come across ClicXAds as you’re browsing online for a legitimate company where you can invest your extra money.

They claim a huge return of investments, which might have aroused your interest.

As a result, you’re searching for answers—is ClicXAds a scam? Or are they legitimate?

If this is what’s bothering you, then you have come to the right place.

In this review, I will provide you a detailed analysis of the company and whether they’re worth investing or should you search for other opportunities.

So without further delays, let’s begin…

Here's My  #1 Recommendation  For Newbies!
Quick Navigation
ClicXAds Review
What is ClicXAds?
The ClicXAds business opportunity
What are its income streams?
How much will it cost me to join?
Can you make a reliable income from ClicXAds?
Is ClicXAds a scam?
What I Don't Like About ClicXAds
What I Like About ClicXAds
Final thoughts
Why I choose Affiliate Marketing over Pyramid Schemes and Ponzi Schemes? 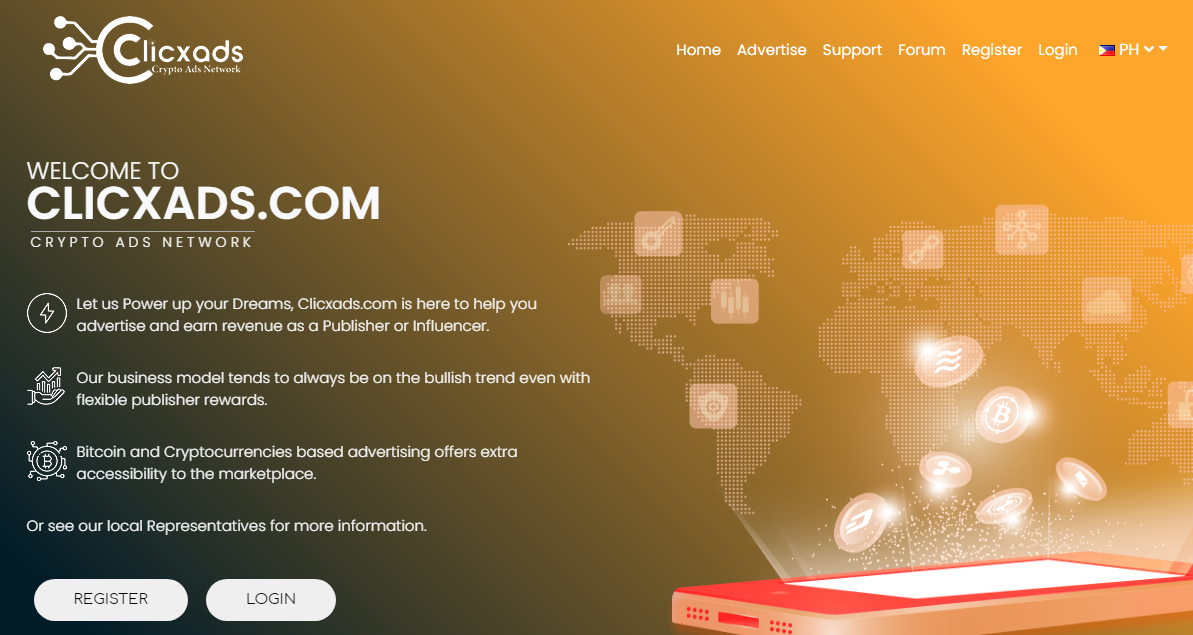 ClicXAds is a company that provides an income opportunity by investing in their Bitcoin packages.

The company did not provide any basic information like founders, date of incorporation, or even current owners.

However, upon checking their domain, it’s suggested that the website was created on February 16, 2020.

The only thing that’s clear is that they sell investments, and you have to recruit investors for you to earn referral commissions. I will discuss this further in the following sections.

I have reviewed companies with similar nature in the past. You can check them out if you like—Forsage, Unitex, Crowd1, Tradera, and Fluorescent Sand, to name a few.

So is ClicXAds a scam? Are they a Ponzi scheme or pyramid scheme? Or they legitimate after all?

Recruitment is the lifeblood of pyramid schemes and Ponzi schemes. Aside from the return of investment, this is because it is where most of their income is derived from.

The business strategy of recruitment is also one of the reasons why MLMs are often compared to pyramid schemes.

Multi-Level Marketing companies also require their affiliates to create a lower network for them to earn an advance in rankings and earn a higher income.

The only difference is that MLMs have retainable products to sell that make them look like a direct selling company.

On the other hand, pyramid schemes don’t have anything to offer—just a promise of high returns as a result of the investment.

This makes them high risk and probability of losing more likely than gains.

ClicXAds does not have tangible products to sell. What they offer are investments. That makes them essentially a pyramid scheme because one qualifying factor to be an MLM is retail merchandise.

The membership fee for ClicXAds is free. However, their income stream is also tied to the starters’ package, the potential investor selected.

Therefore, you have no choice but to avail of the investment if you want to earn income. I will explain more about their membership packs in the following sections.

For a pyramid scheme and Ponzi scheme like ClicXAds, how much you would earn just depends on two things—recruitment and the amount of your investment.

For better understanding, I have summarized their income stream in the following section.

What are its income streams?

The summary of the earning process is as follows—

As mentioned, you’re earning would also rely on how much is your investment.

I will explain the packages and monthly membership costs in the next section of this review.

But as for now, let’s take a closer look at the investors’ supposed return of investment—

Remember that as high as they may, such investment is a high risk, and the potential of losses is much greater than gains.

There’s a good reason why pyramid schemes and Ponzi schemes like Forsage and Crowd1 is banned in certain countries.

Recruitment or referral income is their similarity with Multi-Level Marketing or Network Marketing.

This is the reason why MLMs are often linked to pyramid schemes. The only difference is that MLMs also acts as a direct selling company—offering retail merchandise which the member can sell for profits.

Anyway, ClicXAds offers an opportunity to earn a higher income when they recruit a new member and create a lower network. Thus, the term pyramid was used.

The company lets you earn commissions up to three levels deep.

However, the company failed to explain the details of how this income stream works.

Additionally, it was implied that the bonus shuffles every week.

The only thing that’s apparent is that it pays up to six levels deep. Also, we could safely assume that the percentages are based on the membership package of the investor.

The summary is as follows—

Do the company’s commission and return of investment excite you?

Well, you shouldn’t be. As far as we are concerned, pyramid schemes and Ponzi schemes are labeled as scams in many countries, including the United States, United Kingdom, Albania, Austria, Belgium, Denmark, and Finland, to name a few.

Pyramid schemes are illegal because of their high-risk natures and the probability of losses.

If you want a reliable and better source of income, then you have to check out my best work-at-home recommendation.

How much will it cost me to join?

As mentioned, the membership is free, but you have to avail of the packages to earn income.

There are no retail products, only return of investments, of which the percentage depends on the package the investor selected.

The cost of the investments is via Bitcoin currency.

Visit the description and discover a better way to earn income—

Can you make a reliable income from ClicXAds?

And it is even rarer if the company engages in pyramid schemes or Ponzi schemes.

According to the FTC, about 99% of people who join MLMs lose money than earn anything at all.

The same is true with pyramid schemes. But these are only much worst.

You have to continually recruit for you to earn a higher income.

For newly recruited investors, they try to recruit people they know like family members, friends, and several acquaintances, maybe.

Even though they may know the investor, there’s no guarantee that they would invest in the company as well.

It might lead to annoyance if they consistently push the investment to them. Or even resentment if it fails eventually.

It becomes challenging if they run out of people they know and promote the investment to people they do not know.

But it is more difficult for people with no marketing or sales background.

Not getting enough income because of failure to bring in new investors may cause them to become frustrated.

Eventually, they would become inactive and quit the investment.

For you to earn a higher income, you have to provide higher investment. That’s just how Ponzi schemes work!

It becomes problematic if the investment isn’t delivering the promise they advertised, and the investor has to keep on investing.

As a result, they may end running out of funds to finances the investment. It may eventually lead to them becoming inactive and quitting the investment altogether.

For me, ClicXAds is a combination of a pyramid scheme and a Ponzi scheme.

Ponzi schemes are supposed to be an investment opportunity wherein the company promises a high return of investment with little to no risk.

On the other hand, pyramid schemes are more focused on recruitment.

To give you a better understanding, think of it this way—in a Ponzi scheme, you are not aware that you’re earning, you’re only hoping that your capital works.

While in pyramid schemes, you are aware as long as you being able to recruit new members.

Both business models are flawed and high risk, which is why they are banned in certain countries

Also, pyramid schemes and Ponzi schemes are doomed to fail because they will eventually collapse when they’ve run out of people to recruit or investors.

The only people who earn from this type of business are those people on top of the pyramid (the founders).

Another sketchy thing about ClicXAds is their seeming unwillingness to disclose basic company information like founders, date of inception, or even current CEOs.

Overall, I believe that you should look for other investments if you’re considering this one.

The company is essentially a Pyramid scheme and a Ponzi scheme.

Basic company information was not disclosed.

No positives about this company. I believe it’s best for you to search for other opportunities.

I hope my review has provided you sufficient information in answering an important question—is ClicXAds a scam?

This company is essentially a pyramid scheme and a Ponzi scheme at the same time. They are similar to other companies like Forsage or Crowd1 that has been banned in many countries.

If you’re looking for a legitimate source of income, then continue to the next section…

Why I choose Affiliate Marketing over Pyramid Schemes and Ponzi Schemes?

In Affiliate Marketing, what you’ll basically be doing is to promote a brand using an affiliate link through your online site.

Of course, the success of this endeavor depends on the quality of traffic being driven into your website.

If this is your concern, then worry no longer…

I got the perfect solution for you…

Thank you for taking time off and reading my ClicXAds review!